A reduction in the levels of child malnutrition through improved hygiene and feeding practices, and improved nutrition practice and status amongst women of child-bearing age and children.

For many decades, NPCS’s community projects have focused on the hilly regions of Nepal where poor infrastructure and geographic challenges contributed to poor health and nutrition status. However, recent national surveys identify Province 2 (southeastern “Terai” plains along the border with India) as having some of the worst health and development indicators in the country(Based on NDHS, 2016).

These poor indicators are disproportionately higher among specific Terai ethnic groups. These ethnic groups constate over three-fouth of the population in the province 2 (Madhesh Province).  They are historically marginalized and have performed poorly as measured by indicators of poverty, health, nutrition, education, and women’s empowerment. The utilization of health services by these ethnic groups has been consistently poor for many years.

NPC, therefore, planned to apply its nutrition expertise to a community nutrition project in the Terai region. The selection of a potential project area/community, a detailed baseline nutrition survey, was conducted with financial support from Misean Cara (Irish government) through CMS Ireland. 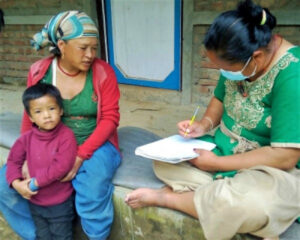 A baseline nutrition survey of 413 households was conducted in September 2021 and revealed 22% of wasting in under-5 children and 37% underweight in their mothers. The survey identified nutrition and health behaviors change is necessary.

Wesley Zaidan supports the project with Misean Cara (Irish government) through the partnership with NPCS and works together to improve the nutrition practice and status among women of child-bearing age and children in the community.