Origin of the name of the Wesley Zaidan 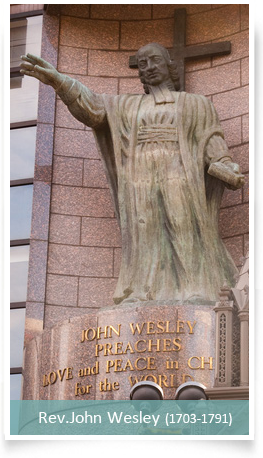 The name of the Wesley Zaidan comes from John Wesley, an Anglican priest who started the Methodist movement during the Industrial Revolution in England in 18th century to communicate and practice Christ’s love among the socially vulnerable. In addition to visiting prisoners in jail, spreading health and hygiene knowledge, and providing food and clothing to those who lacked daily necessities, Wesley developed activities including establishing charitable organizations, clinics, orphanages, and schools for children who couldn’t receive education. The so-called Methodists, under Wesley’s leadership, acted as leaders on many social issues of the day, including prison reform and the abolition of slavery.

Inheriting the spirit of faith and social service of John Wesley and the motto of the United Methodist Women, “Faith, Hope, Love in Action,” the Wesley Foundation will continue to develop public service activities with a global perspective, working with mission partners in Japan, Asia, and the world for the future.

The Wesley Zaidan’s logo was created in 2016 to symbolize the Zaidan’s (Foundation) legacy and mission. The logo mark consists of a W drawn in a straight and simple line using the color blue representing the earth, with a silhouette of a dove on the right side.
The letter “W” represents the purpose of the Wesley Zaidan, which is to “develop leaders with the motto ‘We will live and serve with others in the World,’ inheriting the spirit of faith and community service from the founder of the Methodist movement, John Wesley, for whom the Foundation is named.” The dove symbol represents the wish for peace and growth.