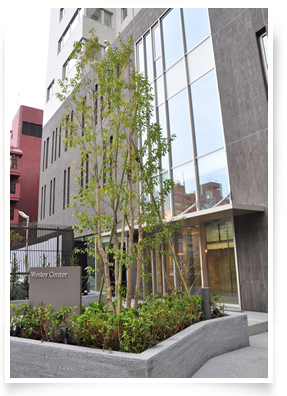 The Wesley Center, where the Wesley Zaidan office is located, was built in April 2010 on the site of the Women’s Missionary House at Aoyama Gakuin. Although the center itself is new, the Wesley Zaidan’s mission history dates back more than 100 years. 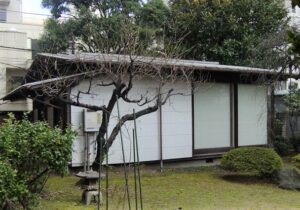 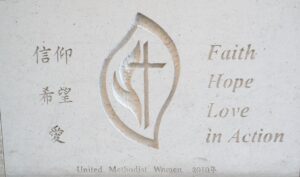 The Cornerstone is for the memorial of the contribution of the United Methodist Women. That is on the wall of the Wesley Center’s building entrance.

The base of this foundation is the “Interboard Mission Shadan In Japan”, which was established in 1902 by missionaries dispatched to Japan from churches of various denominations in North America. For over 100 years since then, churches in North America have dedicated passionate prayers and donations to missionaries working to improve education, medical care, and social welfare throughout Japan. In particular, the United Methodist Women, which organized the first women’s foreign missionary group in the United States in the 19th century and which sent Dora E. Schoonmaker, who founded women’s education institution (one of three schools that became the origin of current Aoyama Gakuin), contributed to build a missionary house for female missionaries working to improve women’s education in Minami Aoyama, where the Wesley Center is now located.

With the revision of the Act on Public Interest Incorporated Foundation, Japanese missions have entered a new era. In order to make the best use of the Gift dedicated across the sea for Japanese society and people more widely, a foundation was established in 2010 to carry out public interest activities, such as education and charity, based on Christ’s philanthropic spirit.

Celebrating the 10th anniversary of the Foundation in 2020, new funds for public interest activities was to be generated due to the redevelopment of the newly donated missionary housing site. Remembering the legacy of missionaries who have worked for education and welfare development in Japan and Asia throughout its long history, the Wesley Zaidan has decided to leverage this fund as the “Wesley Legacy Fund” to develop global leaders who will live and serve not only with Japanese society but also with neighbors in Asia and people of the world.