From July 25th to August 3rd, 11 high school students participated in the UMC Asian Camp in California. This camp was started in the 1970’s by the Japanese American Caucus of the UMC with the hope of empowering and forming the identities of young leaders and has been continuing for over 40 years. Thanks to the dedication and imagination of the 5 camp directors and 18 university student leaders (referred to as counselors), this was an extremely fulfilling camp experience.
From Japan, a total of 11 high school students from Kyouai Gakuen in Gunma, Hokusei Gakuen in Hokkaido and Tamagawa Seigakuin in Tokyo participated. This was the first time some of the students had ever been outside of Japan so they were quite nervous about spending 5 days in a totally English speaking environment. However, once the programs started, they gained the courage to speak up and positively participate in the various activities. 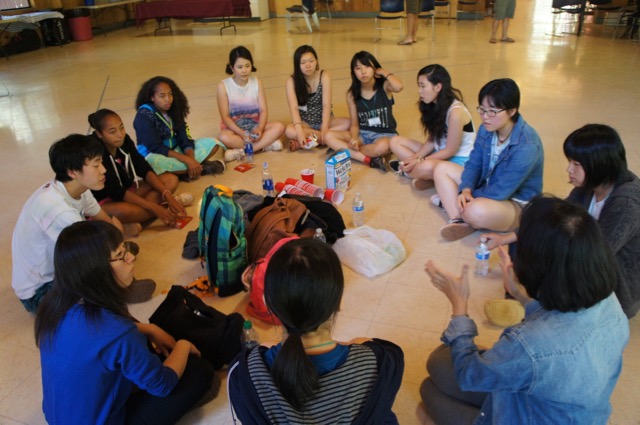 The highlights of the programs were the workshop on social issues and the daily devotion in which many hymns and praises were sung. Each morning began at 8AM with a meditation and ended with lights out at 11PM. Each day was packed with activities from morning to night.
This year’s workshop focused on the identity issues of Asian Americans and human trafficking. The workshop was designed to help the students learn about these issues by using TV dramas and documentaries, making it easier to lead into discussions. During activity time, the students were able to experience many new games that they had never even heard of in Japan.

The most memorable activity was the outdoor game “Messy Day”. Everyone threw colored powder at each other and could not stop laughing after seeing each other covered in many colors. On the last day, there was a talent show. After much practice, the 11 member Japanese team performed a traditional Japanese dance “Soran-bushi”, which included a calligraphy performance, and sang “Hana wa saku (Flowers will bloom)” which was written and composed to build public support for 3.11 disaster recovery efforts. The team got a standing ovation and everyone had a great time.

In the beginning, it seemed like it would be a long 6 days but the time flew by and when the end came, tears were flowing. Saying goodbye was very difficult, and before getting on the bus to go home, there were many hugs and even more tears. For the Japanese high school students that participated, this summer was surely an unforgettable experience.