Staff Report on Service Work Camp in the Philippines 2019

From March 5 to 11, 2019, a work camp was held in San Mateo, Rizal, the Philippines and 11 people, mostly college students, and 1 intern, participated. 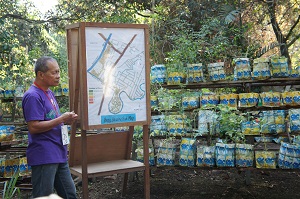 In the work camp, we took part in building a wall on the boundary of the land owned by NGO, Buklod Tao, Inc. and the neighboring land. The Buklod Tao’s land is located in the quiet neighborhood past the residential area. Compared to the city, it is surrounded by nature, and the climate is milder and cooler, but there are no streetlights at night, which leads to burglaries. This is the reason for our building a wall.

Buklod Tao, Inc. is an NGO officially registered in the Philippines in 1996, and is mainly doing disaster risk-reducing activities for the residents and the communities at the basin of the Marikina River in San Mateo. The Marikina River is a branch of the Pasig River that connects Laguna de Bay, the largest lake in the Philippines, to Manila Bay. Buklod Tao, Inc.’s activities are mainly to support the communities especially vulnerable to floods in Mateo. Because there have been so many flood disasters in the past due to the overflow of the river caused by typhoons and heavy rains, Buklod Tao, Inc. is doing such activities as educating the local residents on disaster prevention awareness, putting lifeboats in the area, doing emergency support activities after disasters, giving mental care to the victims, and educating children on environment, in order for the communities to enhance the ability to work on the disaster prevention. For the supporting area includes many economically difficult residents, and it is essential first to stabilize the economical situation, Buklod Tao, Inc. is also helping the residents in doing small businesses and women to make and sell the products from the recycled juice packs. It is astonishing to see how Buklod Tao, Inc. advises the residents to come up with new ideas that can be realized even if they have scarce amount of materials and money, and at the same time, environmentally friendly. 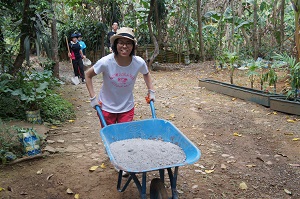 On the first day of building the wall (supporting activities that actually use our manual labor), which was one of the objectives of our work camp, we dug out the soil with shovels, rearranged the reinforcements, and made cement. To build a wall, much cement and many concrete blocks are necessary; we pushed wheelbarrows back and forth so many times to carry gravel, mixed it with cement and water, poured the cement mixture into the base part of the wall, waited until the mixture became stiff, and then stacked the blocks. Since the participants were not used to such work, they could not do it smoothly and looked exhausted at first, but they managed to finish the work by taking turns in the team, and no one was hurt or became sick nor there were any accidents in 3 days. In the short period of time, we could only build a pair of walls, but the participants learned the importance of serving others and building trust relationship in cooperating with others through the labor. 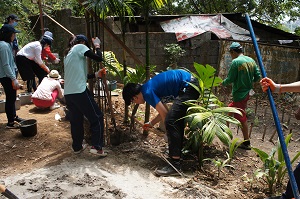 By spending time with staff members of Buklod Tao, Inc., that so fondly accepted us from Japan, the participants were amazed by each member’s sincere attitude and learned how to make a disaster prevention mind in residents and communities. Buklod Tao, Inc. is not a Christianity-based organization, but the founder and the representative, Mr. Manuel, is a Christian who is practicing the act of love, returning what was given to him to the others. The look back session with the participants and Mr. Manuel was especially impressive. He sincerely answered all the questions from the participants one by one. He told us even though there were times he became perplexed, he was doing what was best at those moments, and we all came to know that he is making every effort for the local area. 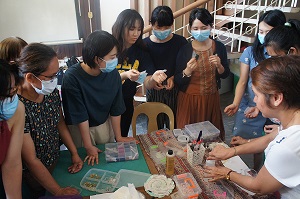 A day after finishing the work with Buklod Tao, Inc., we visited the Batis Women’s Center that helps women, who were the victims of human trafficking in Japan, as well as their families and children, and had a time to exchange with the organization and the women. We had a chance to listen to the women’s stories and time to make accessories with them. From the stories that the women told us with courage, we came to know again the relationship between Japan and the Philippines and were introduced to the poverty issues in the society and to the violence rendered on women. It was a good opportunity for each participant to nurture the sense of commitment. In the look back session at that night, one male student participant stated, “I realized that since men are physically stronger than women, it is essential for men to know of the violence agaisnt women”.

During the work camp, we all started and ended a day with prayers and had a look back session together at night every day. We could see the participants grow through talking to and knowing one another in the look back session, and building trust relationship by breaking the walls inside their hearts. They earned many lessons from the everyday hard labor and also from other participants, and were inspired by them to challenge hardship. The work camp was only a week long, but the participants, whose eyes were opened for international society and social issues, and who understood the differences from the new acquaintances, returned home with international sensibility and confidence.