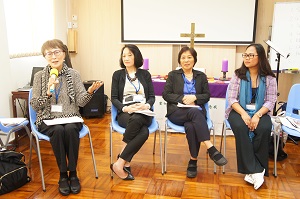 Asian Young Women’s Leadership Development Seminar was held in Hong Kong in March 2019. It was held along with the World Federation of Methodist & Uniting Church Women 11th East Asia Area Seminar 2019 (EAA), which is held once every 5 years. Each area (East Asia, South Asia, Europe, etc.) of the Methodist Church, which has churches everywhere all over the world, also has a women’s organization, and a local and the worldwide conventions are held once every 5 years. Japan is an associate member of the women’s federation in the East Asia area. The World Federation was held in Hong Kong in 2019 where 250 of the church women from the East Asia area, the delegates from the member countries of EAA, and other church women leaders who wished to participate came together, attended service and lectures given according to the theme of the convention, and gave presentations on each country’s volunteer activities and tasks. The election to choose the next EAA delegates and officers also takes place in the convention. The previous convention was held in Singapore in 2014, where the doors were opened for the first time to young women. The current chairperson, Ms. Nagui, is enthusiastic and cooperative in rearing leadership in young women and pushed the realization of the seminar for young women’s leadership development. To hold the seminar along with the convention had the following objectives: 1. To allow young women to have exchanges with other young women and the participants of EAA. 2. To give the convention a role of an alumni gathering. 3. To testify how the experience of the convention has influenced the participants and how they are demonstrating leadership after attending the convention. 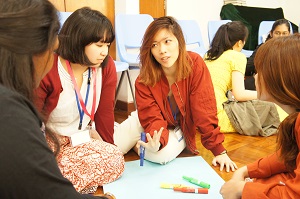 The schedule was for 29 young women (from age 18 to 35) from 10 Asian areas, including Hong Kong and 3 from Japan, to attend the programs only for young women for 2.5 days and the EAA programs for the remaining days.

The Asian Young Women’s Leadership Development Seminar has started in the Philippines in 2009, and a total of about 300 women have attended 10 seminars in 10 years from 2009 to 2018. The Wesley Foundation has become the sponsor organization from the Cambodia seminar in 2016 and has been planning, organizing, and implementing the seminars. 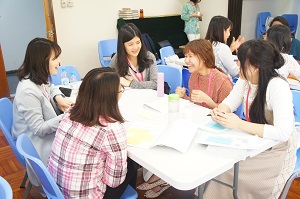 In the EAA seminar, the time was set to give young women an opportunity to present their ideas, and”Proposals from young women of East Asia” were presented 2 times to the women of older generations.

The Asian Young Women’s Leadership Development Seminar is usually planned on the 5-day basis, and even so, the participants claim that they need more time to rest or there are too many sessions. This year, however, we had only 2.5 days, which is the shortest in the history, in which the participants had to manage to accomplish all the programs of the seminar and the presentation to EAA. The presentation for EAA seminar was divided in 2 parts: the proposal from young women and the action plan. The participants chose a leader and decided on the content of the presentation and also the way of presenting it.

Independence, positive attitude, and flexibility were remarkable in the seminar 2019. In the ordinary seminars, the participants become intimate at the latter part of the program, but this year, maybe because they had such limited time, they instantly became friends and every participant was independently and actively working on the sessions. We felt proud and found promising possibilities in young women by looking at their attitude of doing best in the limited time, their dignified manner in presenting the ideas, and their coming up with creative ways of presentation and actually implementing them.

After the hectic seminar, all the participants went back to their own countries, embracing the theme Bible verse, “Here am I. Send me!” We are more than grateful to those who made the seminar in Hong Kong 2019 successful.

【Voice of a participant】

I have not been able to speak up or express my opinions for the lack confidence or thinking of what people would think of me. After the seminar, however, I was given the determination to act. I could strongly feel that it is the Lord who is calling, and the Lord who is sending me. I honestly think that even from now on, I would probably be frightened thinking what people would think of me. But since I live in God’s protection, I can act with confidence. In this seminar, I was sent by the Lord to be a leader. I need to fulfill my mission. As a first step, I would like to act as a Christian woman in my church and school. (College student, age 20)