This is the first time for Wesley Foundation to launch a study work camp in Hokkaido.
It was held from September 3rd to 6th and four participants joined in .
Here is their reflection on the camp and please check it out.

September 3rd
Following is the reflection of our intern Seika . 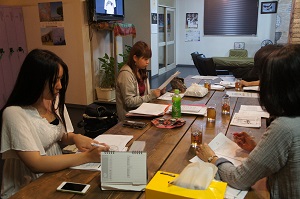 Though I was worried about the weather, all the participants could safely get together and start the study camp in Hokkaido. In this program, we are going to have fellowship with those who have mental disorder and the Ainu(Indigenous people who primarily live in Hokkaido Japan, but also live in the north of Honshu, and Sakhalin island in Russia). Though I scarcely have opportunities to communicate with such people in my daily life I would like to consider whose neighbor I can be through the encounter with them; for a message about Good Samaritan was given in the opening service.

September 4th
Our participant, Ami’s reflection on today is as below. 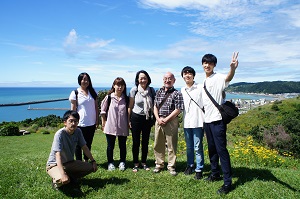 We spent the second day of the work camp in Bethel House. What was most impressive during this visit was bright and warm smiles on those who have mental disorders. Though we met one another for the first time, they talked to us, performed spinning tops which was what they were good at, sang songs and welcomed us very much. We also participated in SST (Social Skill Training), in which each one of the participants opens up their weakness to solve their own problems together with the other members. I learned that when we confront an issue, it is significant to call for help from people but not cope with it by ourselves.

September 5th
Our participant, Ken’s reflection on today is as below. 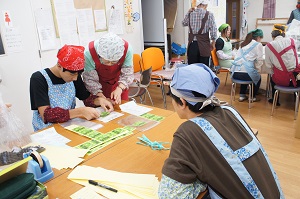 We hulled strawberries in the morning. I was impressed at the concentration power of those who work in Bethel House since I am bad at doing a monotonous task. After lunch, we packed seaweed, and thanks to their kind teaching, I could make it.
Though we met one another for the first time, they friendly talked to me. I got the task finished before I knew it since I could work in a fun atmosphere. 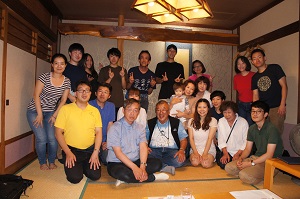 Through these experiences, if people with disabilities cannot do something, I supposed we should not consider it reasonable. It is also not good to pay too much attention to their disabilities since such ideas sometimes cause them difficulties to work in the society. Whether we have disability or not, everybody definitely has their own way to shine. We all are the same humans who have similar troubles or distress, so it should be important not to build a wall but to find the best ways to live our own lives. Nowadays, a variety of stress causes even the young depressed, and its number has been increased. One of the biggest causes is that the outcome of work is prioritized to caring people’s hearts in this era. However, I am against this way of working. I believe taking care of staff members’ hearts, reaching out to each other, and bringing out the best in each one of them lead the best outcome. Then I felt Bethel House had been practicing it, so I would like to develop myself even bit by bit from the learning here.

September 6th
Our participant, Aogu’s reflection on today is as below. 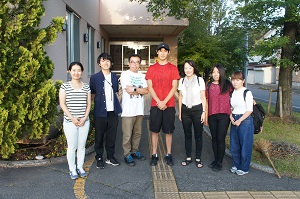 The study work camp took an unexpected turn…
The huge quake that occurred at midnight of September 6th caused blackout all over Hokkaido. We could not have fellowship with Ainu children; however, we could have an opportunity to listen to Mr. Ashizawa, who has been providing educational support to them. I heard of discrimination and persecution that the Ainu suffered from, which I did not know, as well as the fact that a courageous action the youth took has brought restoration in their pride as the Ainu. I was shocked to hear that the Ainu, whom I have considered as the Japanese, have history that they went through a long and agonizing period of persecution and that they are in the process of getting back their own identity. I am really thankful for such a precious opportunity to know this history. Although the camp ended with the quake, all the four days were rich in content. I deeply thank Rev. Hikari Kokai and Ms. Takito, the staff of Wesley Foundation, for planning and supporting the camp. Thank you so much.