The third session of the “Young Generation Global Mission Series” was held on Saturday, January 23, from 10:00 to 11:45. 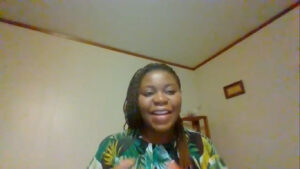 Ms. Heureuse Kaj is now serving as a preacher in two churches in Kansas, USA.  The story of her footsteps as a Christian before she was lead to be a preacher seems to have attracted young people who are in the midst of thinking about their lives.  She also talked about the social justice issues in Congo; since she grew up in a society where severe sexual and domestic violence still exist, a desire to do something on poverty and women’s rights lead her to apply for a Global Mission Fellow.

To have been sent to Japan as a Global Mission Fellow, and to have learned how Japan Christian Women’s Organization, a shelter for women, operates were “life-changing experiences”, she said.  She also told that in order to support women and children, especially with experiences of abuse, she now has a desire to study counseling.

She also thought before she participated in the Global Mission Fellow Program, the word ‘missionaries’ meant to pray or to tell the Bible stories, but through the program she learned that to face the social justice issues and ‘do something about them’ are also missionaries.  These were very impressive words from her.

When we hear the word ‘Ministry’, we seldom think of telling the Bible and Christian stories to others, but mission activities of the Global Mission Fellow Program indicate ‘Ministry’ as the social activities that a person should dedicate oneself to, using one’s talents (experiences and skills) as a Christian.  Of course, Christian faith is necessary, but the interest in social justice issues and a will to wrestle with the issues are equally important.

The Wesley Zaidan is also an official application reception organization of the Global Mission Fellow, a long-term mission program of the General Board of Global Ministries of the United Methodist Church.  Anyone interested in the program is welcome to send a message to the address below.