Today, after breakfast we split up into two buses to go to our first destination.

In my bus, staff Sophany Heng, shared from Joshua 1:9 with us. She shared that God chose Joshua after Moses to follow God and lead His people. It was not for a small purpose that Joshua was chosen, but a big one. She prayed that each of us chosen to be a part of AYWLD this year would know our big purpose in God’s good plan and not be afraid of what God calls us to do. 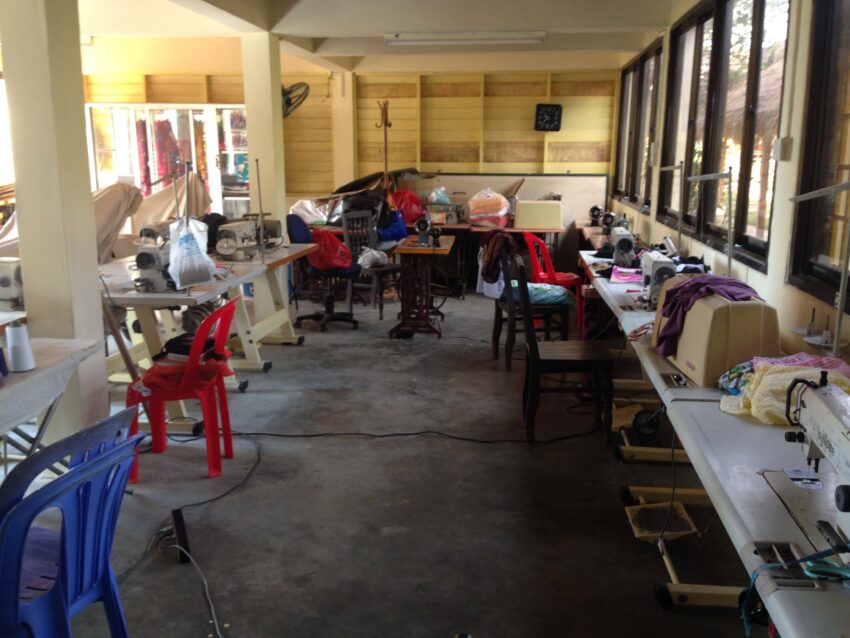 We arrived at the EMMAUS Women’s Center, which is a place dedicated to training young women for a two-year period, in skills such as sewing, cooking, and English, which will help their futures. We had a chance to see and buy some of the items which the girls make in the center. In fact, one of the Cambodian participants currently is learning at this center. Directly besides EMMAUS was COSI, an orphanage which another Cambodian participant at AYWLD graduated from. On our bus ride there and back, I had the privilege of sitting beside her and hearing how blessed she was going to COSI after her parents passed away from AIDS. 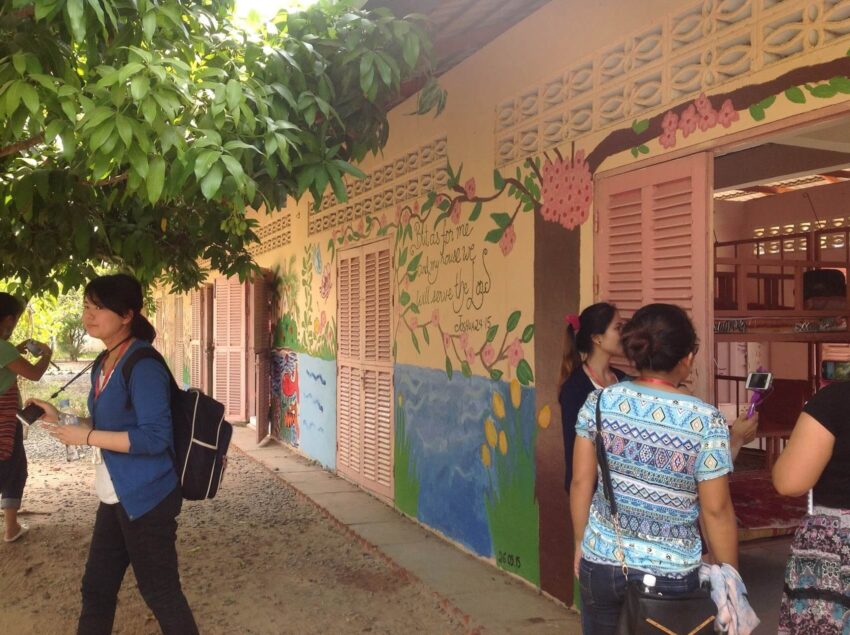 At EMMAUS, we sat down for our first workshop to learn about Cambodian history and culture. There, we learned about the big role women have played in Cambodia’s history, going back to 613AD when a queen led Cambodia during the Hunan era. We also learned that two women faces are besides the king’s face in the Angkor Wat, which some people have tried to erase. It is too bad that many women’s voices are unheard in Cambodia today, even though they have historically played a big role for the nation. 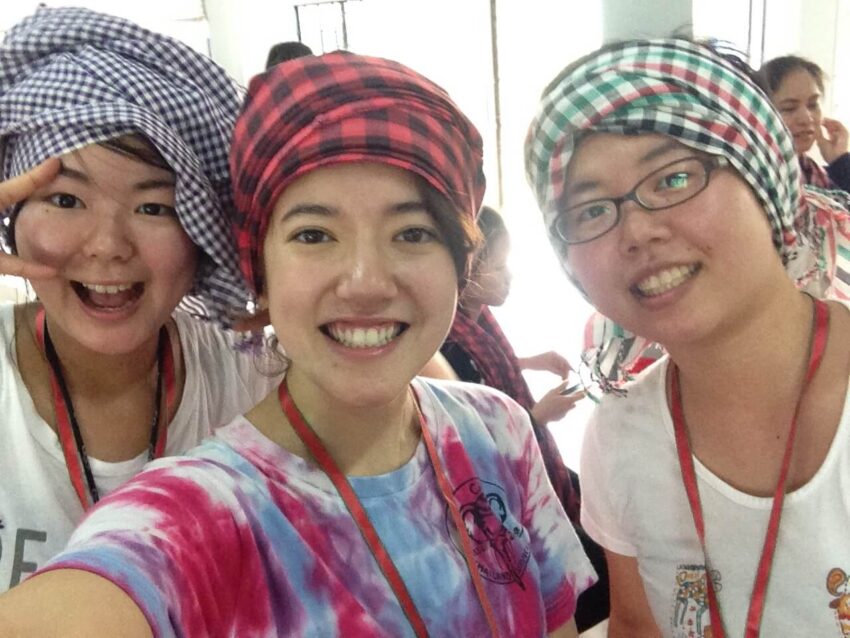 Here, we were also presented with the Cambodian Krama, a scarf-like wrapping which is unique to Cambodia in Southeast Asia. They showed us numerous ways to wrap it around ourselves, as well as other uses like as a bag or as a hammock or toy for babies. It is said that there are more than 60 uses! This surprised me and I was so happy to receive one. I know we will treasure this gift very much. 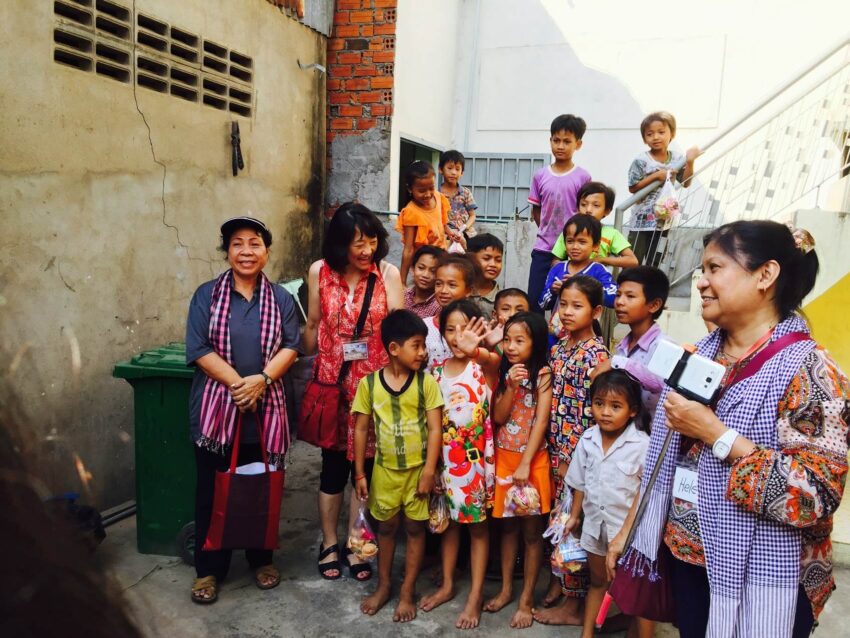 After lunch, we rode on the bus to go to Hope House, a home dedicated to helping kids who live in the Vietnamese slum area. The children sang us some songs and welcomed us there. We learned about this ministry, which allows families to send their children during the day for free. They educate the children, regardless of race or other differences, in English and Christian values, and take care of them, protecting the children from trafficking and other dangers in the area. 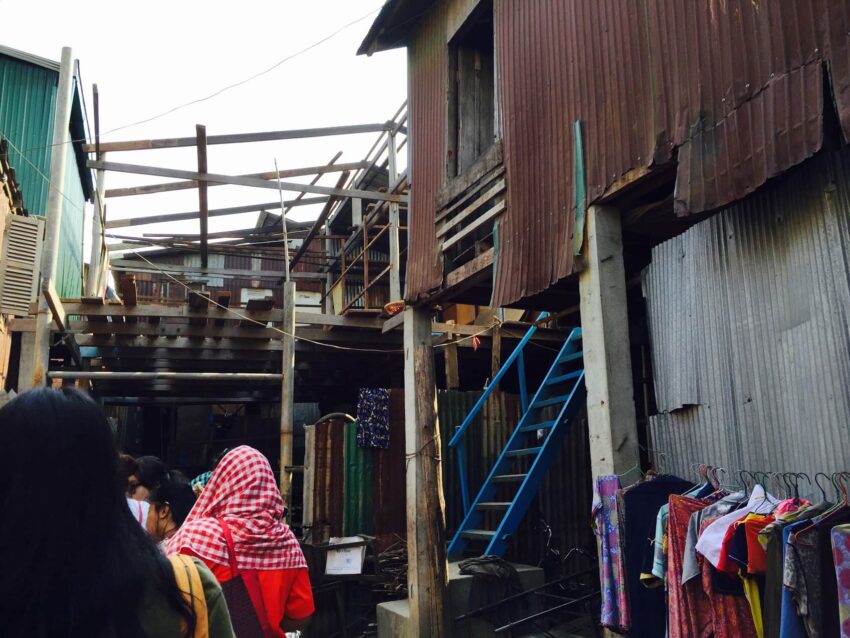 They took us to walk through the slums, which was a very new and shocking experience for many of us. The roads were very narrow and houses close together, which they told us is dangerous when a fire breaks out. As we walked through, I prayed for hope to be restored in the people’s lives. I was extremely touched by the staff’s heart of service and love for these families, they were serving Jesus in this place. Even as we were walking through, the staff were asking more parents if they wanted to bring their children to Hope House to learn English. 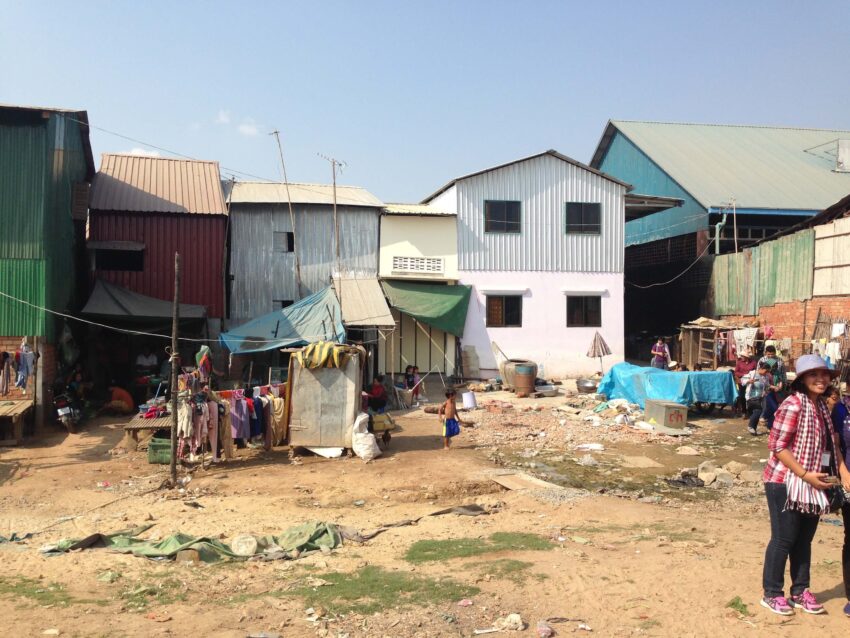 After arriving back at the center, we heard from a representative of IJM, the International Justice Mission. We heard about their vision and mission, and their approach to solve the issue of sex trafficking in Cambodia. He shared with us their progress, including a drastic drop in minors in the sex industry (30% in the early 2000s, now down to 2.2%) and their closing of a 13 year long project. They also shared with us their plan to open a new project to fight labor trafficking in Cambodia. He emphasized their tactics to help develop the local public justice system, so that they can eventually fight against injustices on their own in an efficient and correct way. 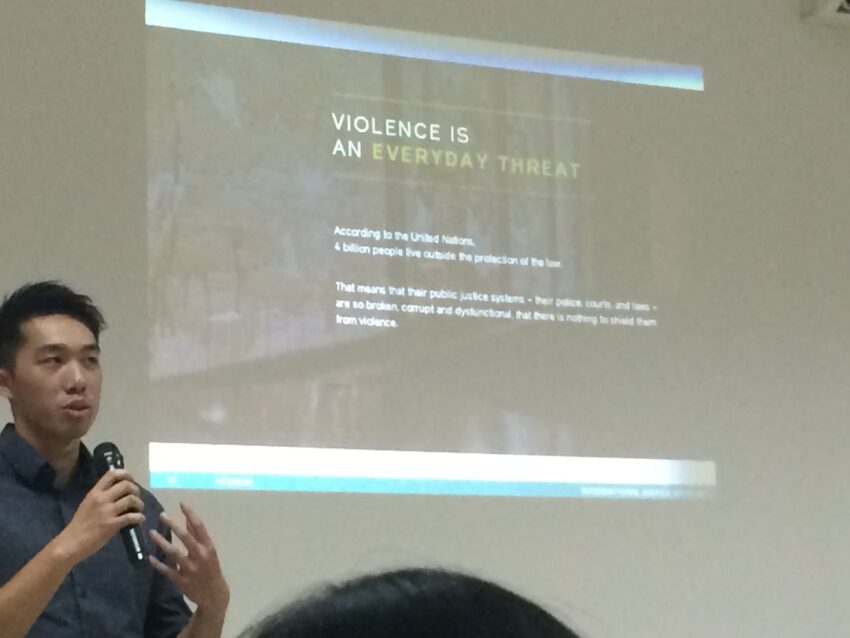 The representative reminded us that although IJM was the first to come to Cambodia to combat sex trafficking, God is ultimately the one who cared and came to this country first. I also felt this while walking through the slums and being with the workers at Hope House, that God is the one who saw, came and loved them first. All we have to do is simply follow God to where He wants us to serve Him. It was encouraging to see an organization so passionately and actively take a part in seeing justice restored to our world, and not only working to restore but to also working to prevent horrible crimes from happening in order to create peaceful communities.